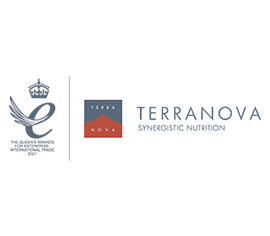 TERRANOVA Multivitamin Complex Soluble and insoluble dietary fibre complex enhanced with highly active, whole and unadulterated superfoods and botanicals. This is a broad range of different vitamins with vitamin C being the highest potency.

TERRANOVA Multivitamin Complex Soluble and insoluble dietary fibre complex enhanced with highly active, whole and unadulterated superfoods and botanicals. This is a broad range of different vitamins with vitamin C being the highest potency.

Spirulina plankton is one of nature`s richest sources of plant pigments (such as chlorophyll, carotenoids and phycocyanin) and highly digestible protein (typically more than 55%), as well as providing vitamins and minerals, fatty acids and other compounds vital to life (such as the powerful antioxidant enzyme superoxide dismutase [SOD]).

SRB has one of nature`s highest concentrations of the vitamin E-related compounds tocopherols and tocotrienols, as well as B-vitamins, fibre, essential fatty acids, minerals and more than 100 different compounds possessing antioxidant activity (such as alpha lipoic acid [which also recycles antioxidants such as vitamins C and E], coenzyme Q10 (CoQ10), carotenoids and the antioxidant enzymes superoxide dismutase (SOD), peroxidase and catalase).

A very high content of vitamin E (both tocopherols and tocotrienols), vitamin C and plant pigments such as flavonoids and carotenoids make sea buckthorn berries one of the most owerful antioxidant plants ever studied. Sea buckthorn is also noted for its concentration of omega 7 fats, which are less well known than omega 3, 6 and 9, but are highly regarded for their potential health and beauty applications.

Blackberries are among the highest ORAC rated antioxidant fruits and a potent source of anthocyanin flavonoids and carotenoids (especially zeaxanthin, lutein, beta carotene and cryptoxanthin).

A true superfood, the levels of so many important nutrients in watercress range from good to excellent - with carotenoids, flavonoids, glucosinolates (which convert into isothiocyanates), vitamins A and C, folic acid, vitamin K, calcium and iron being among the most notable.

Start typing to see products you are looking for.

There are no more items in your cart